Linked from this page will be any information I come across on my travels related to that country's response or consequences of Climate Change.

We have one little planet to live on. Let's look after it. 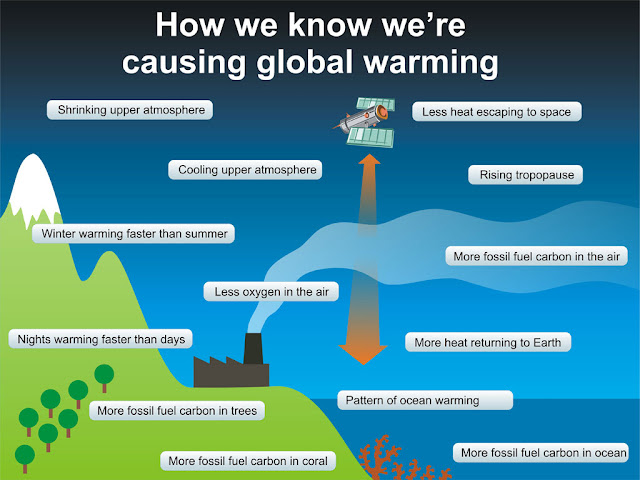 The Consensus
There is consensus among scientists, due to the strength of the science, the data and the basic physics.

"Over eight out of ten American climate scientists believe that human activity contributes to global warming, according to a new survey released by the Statistical Assessment Service (STATS) at George Mason University."
http://stats.org/stories/2008/global_warming_survey_apr23_08.html

"Our results reveal that survey respondents generally agree about the nature, causes, and
consequences of climate change, and are in agreement with IPCC findings. We also found that there is
strong support for a variety of policy initiatives to reduce greenhouse gas emissions."
http://bush.tamu.edu/istpp/scholarship/journals/ClimateScientistsPerspectives_ClimaticChange.pdf

"82% of 3146 Earth Scientists responding to a survey agreed that man is contributing to warming. As their specialty in climate science increased so did their belief in mans contribution to warming to a whopping 97% for the most active climate scientists."
http://tigger.uic.edu/~pdoran/012009_Doran_final.pdf

"Here, we use an extensive dataset of 1,372 climate researchers and their publication and citation data to show that (i) 97–98% of the climate researchers most actively publishing in the field support the tenets of ACC outlined by the Intergovernmental Panel on Climate Change, and (ii) the relative climate expertise and scientific prominence of the researchers unconvinced of ACC are substantially below that of the convinced researchers."
http://www.pnas.org/content/early/2010/06/04/1003187107.full.pdf+html

"2004 article by geologist and historian of science Naomi Oreskes summarized a study of the scientific literature on climate change. [7] The essay concluded that there is a scientific consensus on the reality of anthropogenic climate change. The author analyzed 928 abstracts of papers from refereed scientific journals between 1993 and 2003, listed with the keywords "global climate change". Oreskes divided the abstracts into six categories: explicit endorsement of the consensus position, evaluation of impacts, mitigation proposals, methods, paleoclimate analysis, and rejection of the consensus position. 75% of the abstracts were placed in the first three categories, thus either explicitly or implicitly accepting the consensus view; 25% dealt with methods or paleoclimate, thus taking no position on current anthropogenic climate change; none of the abstracts disagreed with the consensus position, which the author found to be "remarkable". According to the report, "authors evaluating impacts, developing methods, or studying paleoclimatic change might believe that current climate change is natural. However, none of these papers argued that point.""
http://en.m.wikipedia.org/wiki/Surveys_of_scientists%27_views_on_climate_change

An investigation of 13,950 peer reviewed science articles found only 24 or 0.17% or 1 in 581 that reject global warming or endorse a cause other than CO2 emissions for observed warming.
http://desmogblog.com/2012/11/15/why-climate-deniers-have-no-credibility-science-one-pie-chart
http://www.jamespowell.org/PieChartII/piechartII.html

"The number of papers rejecting AGW is a miniscule proportion of the published research, with the percentage slightly decreasing over time. Among papers expressing a position on AGW, an overwhelming percentage (97.2% based on self-ratings, 97.1% based on abstract ratings) endorses the scientific consensus on AGW."
http://iopscience.iop.org/1748-9326/8/2/024024/article
http://www.theconsensusproject.com/

"The list contains scientific organizations around the world that acknowledge the global impact of rising atmospheric greenhouse gas concentrations from human activities. While many more organizations could likely be added, the list is limited to those that have either issued a singular statement of their own or signed in agreement to a collective statement regarding the anthropogenic impact of rising emissions on global climate and the global biosphere.
All statements have been issued since 2001.
At present, there are 171 organizations on the list that span all continents outside of Antarctica."
http://scentofpine.org/consensus/

There are no corresponding surveys of climate scientists or lists of internationally recognised scientific organisations that dispute this consensus.


Below I will outline observations and information from people I meet around the world about the local effects of climate change. These are not scientifically  verified and are merely personal observations or statements. Where possible I will place links to further information on the topic.

In Montevideo I was told that the climate changing to a warmer and wetter one is encouraging the risks from Dengue, Yellow Fever and Malaria. Mosquitos that carry previously eradicated diseases have been found.

The Magellan penguins in Punta Arenas have been affected by climate change due to the fish being affected. I was told that they now need to swim an extra 35km to find fish and are also moving their colonies to less protected areas with more natural predators and man. Numbers have been declining over the last couple of decades.

In Santiago we were told that they get a lot of their water from glaciers, which as they are retreating will lead to fresh water problems, also a lot of their power comes from hydro.

The Viedma glacier is shrinking as are most of the glaciers in the Patagonian expanse. We walked for about 20 minutes to get to the glacier over rocks that 20 years earlier  had all been part of the glacier.

As I took a boat cruise on the Parana River Delta, an area with a whole community living on islands on the river, I wondered about the effect of rising sea levels on this community.

Sheep numbers have been declining dramatically in the Argentina/Chile Patagonian area from over 21 million to about 8.5 million. Contributing to this decline has been a sharp increase in mean annual temperatures consistent with global warming but temperature records have not been kept long enough for firm conclusions and there is a large range of temperatures in this area.

Egypt had an unusually cool winter and it was raining when we were there in March, which we were told was not normal.

The O-torii gate of Itsukushima Shrine had its top blown off by a spring storm in April 2012. The gate is currently covered in scaffolding while they rebuild the top. Our guide said that in 22 years of being a guide she had never seen it covered and had never witnessed a spring storm like that.

Miyajima Island is being affected by rising sea levels because the temples are so close to the shore.

Huge coal industry and very carbon intensive economy producing 42% of the CO2 in Africa. 90% of its power comes from coal, even though it is a sun rich country.

The world's largest tropical lake, Lake Victoria, is shrinking. It is said that rising temperatures are one of the contributing factors.

Sardines in Durban are leaving due to the warming ocean. Durban beach has lost its blue flag status because of 800,000 cubic metres of effluent and industrial waste going into the ocean.

Crops of Roobuis tea are decreasing because of less rainfall. Northern Cape is struggling with erosion due to higher intensity rainfall when it does occur.

I would like to cover Europe generally as a whole. One of the reasons being it is difficult now to find specific examples as we are travelling on our own and not in tours. The only information we are getting is from chatting with locals.

As I am writing this Europe in general has just gone through one of its coldest winters on record and is split between a mild to a hot summer depending on where you are. Currently Portugal is in drought conditions and in a heat wave, while England is very wet with major flooding. Wales in particular recently had rains over a 36 hour period 5 times higher than their general flooding conditions. Greenland has just briefly lost over 90% of its surface snow, something never seen since satelite observations. In virtually every country we have been in locals have said to us that the weather is not normal.

One consequence that I did hear was on the Glacier Express where they told us that the Aletsch glacier (29 billion tons of ice) is losing ice. This is in Switzerland where they rely heavily on hydro for power and the glaciers for fresh water. Another was in Iceland where they said they have had an increse in polar bears from Greenland in the last 4 years.

I find the situation Europe is facing disgraceful considering that it is one of the few places in the world that has a co-ordinated effort underway to tackle climate change. They have reduced greenhouse gases by over 17% over the time that their carbon taxes have been in effect.

It has been very enjoyable though to see the outward efforts of their actions. For instance going through Germany on the train we would see building after building covered in solar panels. On the ferry heading into Denmark the first thing we saw were dozens upon dozens of wind turbines stretching across the horizon. A local in Denmark was telling us how they source more than 20% of their power from wind and currently are putting huge resources into wave energy, which considering waves never stop, could be a major future energy source. Iceland source 100% of their electricity from a combination of hydro and geothermal and get their hot water directly from thermal sources. Norway gets 97% of its energy from Hydro.

All through Scandinavia there is a high reliance on renewable sources and considering that the atmosphere here seems so crisp and clear compared to other places we have been one wonders if the clean energy is partially responsible.

Canada has unfortunately gone backwards with its current federal government. The one bright spark is British Columbia. They have a government that is listening to the science and economists and have implemented a carbon tax, this is set at $30 per tonne. After 4 years they have performed economically better than the rest of Canada. Its emissions have reduced and their personal and corporate tax rates are the lowest in Canada. This is similar to what happens in most countries that have put in a carbon tax.
http://business.financialpost.com/2012/07/05/4-key-reasons-why-bcs-carbon-tax-is-working/
http://www.fin.gov.bc.ca/tbs/tp/climate/A4.htm

I was lucky enough to go into an actual working turbine on Grouse Mountain. Its blades started turning and producing electricity while I was in it. This turbine creates enough power in a year to power 400 homes.

In the Columbia Icefields you can find the Athabasca Glacier that has lost half its volume since 1898, and the pace of warming has picked up since the mid 70's.
http://icecubicle.net/2009/10/21/athabasca-glacier-rapid-retreat/